Newsweek published the latest in a series of best-selling articles on Olivet University on Wednesday as part of its ongoing campaign to unethically exclude Christian university accreditors by highlighting a decision likely error of the NAE to suspend Olivet’s status – while pressuring the university’s accreditors to do so. the same.

The hit pieces stem from Newsweek CEO Dev Pragad’s threats to launch a “nuclear bomb” against his declared enemies at Olivet University, where he was formerly dean of information technology, but with which he has par subsequently disavowed all ties in order to gain leverage for private control. from Newsweek.

Newsweek, in the latest bestselling article, fails to mention threats from its CEO, which were widely reported by HNGN, as well as an ongoing lawsuit by Newsweek against Olivet University, the subject of its headline. These extreme ethical and journalistic violations add to the growing list of offenses the liberal media outlet is willing to commit across its legal press against its CEO Pragad’s targets at Christian University.

Suspension of the NAE based on an erroneous decision

Newsweek reports that Olivet’s membership has been suspended by the National Association of Evangelicals (NAE) due to the New York State Department of Education’s (NYSED) decision to allow the expiration of Olivet’s temporary permission to operate in New York. The New York campus was a satellite of the university, and Olivet’s California headquarters are still fully operational.

HNGN has learned based on first-hand reports that the NAE had, just prior to the suspension, proudly announced that it would be featuring Olivet in its May 2022 Connections newsletter.

Yet the NAE suddenly suspended Olivet’s membership in July 2022. As Olivet told Newsweek, this action was taken without proper due process and without any communication before or after the decision, underscoring the likelihood of another decision influenced by speculation and media pressure rather than facts.

The NYSED ruling that Newsweek claims to have influenced the NAE, meanwhile, was already covered by a HNGN article, which showed that the NYSED decision was likely an abuse of bureaucratic power and was heavily influenced by Newsweek’s repeated harassment of one or more NYSED officials.

At the time of the ruling, HNGN confirmed that Newsweek had contacted NYSED multiple times regarding Olivet University. The department itself acknowledged that Newsweek had contacted it on several occasions and, almost exasperated, said: “The department received several requests from Newsweek, the most recent today. [June 30]“, according to a previously verified HNGN email.

Newsweek’s presentation of this flawed story as a global headline serves as a reminder of its CEO’s true intent – ​​to use any means necessary to attack Olivet in order to gain complete control of Newsweek.

Newsweek’s latest article uses the erroneous premise that Olivet is the “center of a federal criminal investigation” and a “growing legal dispute among Newsweek shareholders.” These statements are deliberately misleading and false.

In an article on HNGNthe federal investigation was shown to be based on false statements by students in an extortion ring.

Furthermore, it was revealed that these students were contacted by CEO Pragad himself – a shocking example of a news publication CEO getting directly involved in the newsroom as an investigative journalist to fabricate stories for its own private commercial interests, with no disclosure for good. journalistic integrity.

Meanwhile, at least one Newsweek editor has directly confessed to his own selfish motives behind writing articles attacking Olivet.

In a TikTok video posted on July 5, 2022, Pragad follower and Newsweek editor Naveed Jamali said he was afraid of losing his job if the facts of the court case against Dev Pragad turned out to be true. He is also seen misinterpreting the recent NYSED decision as the “cancellation” of Olivet, and that he expects other states to “follow suit.” He fails to mention the role of Newsweek reporters in actively agitating state and accreditation agencies to take such action, in an effort to promote Pragad’s private business interests, while acting at the same time. time as “journalists”. Jamali has since taken down the video.

In addition, another of Pragad’s disciples and author of the latest bestselling article, attack journalist Alex Rouhandeh, was promoted on July 11. This was done after Rouhandeh repeatedly wrote negative articles about Olivet University in line with Pragad’s threats. Pragad’s newsroom gave him the new role of “Congress correspondent” at Newsweek shortly after he began his string of attacks on Pragad’s haters.

These actions point to a specific personal motive behind the attack articles repeatedly launched by Newsweek editors and reporters at Olivet. Whether out of fear of losing his job or encouraging best-selling stories with promotions, Newsweek CEO Dev Pragad has created a newsroom environment where his editors and reporters feel they should attack a Christian university. with biased and unethical articles to protect their jobs.

Additionally, Newsweek continues to defy fact-checking processes and claims that the students were held “prisoners” at the university, willfully ignoring overwhelming evidence to the contrary. Evidence that Newsweek deliberately ignores includes Previously confirmed photos from HNGN showing the student in question at a barbecue laughing and smiling when, according to Newsweek, the student was supposed to be a “prisoner” at Olivet. Newsweek also ignores damning evidence that when federal agents visited the Olivet campus, they found peaceful and happy students and employees — far from the “center of a federal criminal investigation” — and a fact that Newsweek blatantly omitted.

Pragad himself knows, as a former dean of the school, that all of the focus and details in Newsweek’s stories are false, and yet he encouraged the publication of such false statements for personal gain. To avoid confronting this contradiction, the publication has conveniently claimed for months that the CEO, who works in the same office as the newsroom, could not be reached for comment.

According to a recent court casePragad paid himself millions of dollars without the knowledge of the board as Pragad evaded Newsweek’s corporate approval processes.

An anonymous Newsweek spokesperson, in a blatant attempt to justify the CEO’s allegedly unauthorized movement of millions of dollars to his personal company accounts, calls him “in line” with the market for a “turned-up” CEO.

However, according to the court case against Pragad, the market had no determination in Pragad’s repeated raises and bonuses – since they were said to have been done completely without any board approval, and in at least one case, were based on minutes Board meeting cards fabricated by Pragad as he moved to self-authorize more than $4,000,000 in raises.

Despite sensationalized headlines in its hit series, Newsweek has not presented any evidence that Olivet has any connection to a shareholder dispute at Newsweek – other than the ties Newsweek itself has artificially forged to help cover up. the claims of its CEO. illicit activity.

For example, Newsweek artificially forged a connection with Olivet by suing Olivet – then, in an unprecedented move, writing a series of articles against Olivet. without revealing that the publication itself is pursuing the subject matter of its best-selling articles – giving the magazine a clear vested interest in fabricating news to influence the legal proceedings it invented. This happened in accordance with Pragad’s earlier stated intention to mow down his opponents like “puppies before a machine gun”, ostensibly to gain leverage in his court battles and personal negotiations to gain control of the company. So far, his tactic has failed completely, as shareholder Johnathan Davis, the husband of former Olivet chairwoman Tracy Davis, has repeatedly refuted Pragad’s hostile takeover attempts.

In defense of the unethical actions that Newsweek’s newsroom has already taken that go well beyond journalistic integrity, Newsweek editors and reporters are attempting to negatively influence all related organizations at Olivet, even resorting to unethical and extra-legal processes. In doing so, Newsweek’s newsroom continues to add to the long list of ethical violations it has committed until today – as mercenaries protecting the private business interests of Newsweek CEO Dev Pragad.

But instead of attacking Olivet and trying to separate him from his accreditors, Newsweek should write about the alleged misdeeds of its own CEO, Dev Pragad, and his unethical influence on Newsweek’s newsroom, covered at length. in HNGN articles (By covering the lawsuit against itself, Newsweek plays down the downside, IBT Media Fights Back: Owner of IBT’s “Legitimate and Legal” Newsweek, Lawyer in the United States; Dev Pragad as supposed owner a “fiction”, a “front”) and in a recent lawsuit against Pragad. This includes the original lawsuit allegation that Dev Pragad does not legitimately own any shares in Newsweek. Davis also previously said that Pragad himself was the target of an investigation, which Newsweek declined to report on.

Outdated photo of Olivet by Newsweek

Rightly, Newsweek continues to use an outdated photo to fit its story rather than the facts. The Olivet campus has been much revitalized since its acquisition of the property. Olivet said in a recent press release that the campus will continue to grow rapidly to help evangelicals around the world. 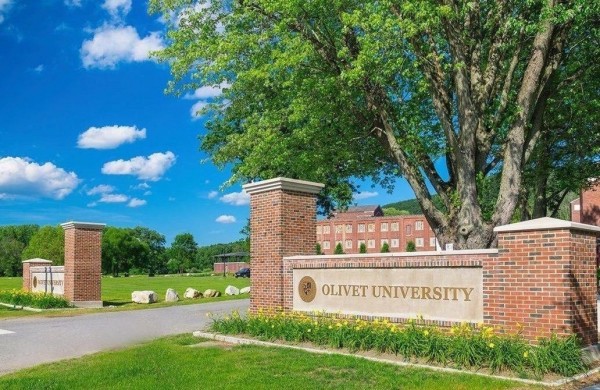 ⓒ 2022 TECHTIMES.com All rights reserved. Do not reproduce without permission.